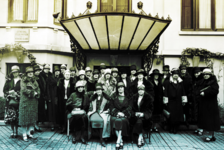 In 1929, eleven women organized Stone Mountain Woman's Club. Their initial goals were to clean up the debris and soot from the freight trains that came through town and to clean up the city and the local cemetery. in 1930, the Stone Mountain club became affiliated with the General Federation of Women's Clubs.  The club sponsored a Horse Show fundraiser for a number of years.  The members built a clubhouse in 1956 on donated land and paid the mortgage off within two years.The  main fundraisers now are an annual home made dessert booth at the Yellow Daisy Festival in Stone Mountain Park and an annual Home for the Holidays Christmas Home Tour. An evening club was started in 2012 for ladies who could not attend the traditional day time meeting.  Club members are involved in many community projects.  The Sue Kellogg Public Library was named after the club member who led that project and made it become a reality. Membership is open to all women who are interested in supporting the community, helping those in need and working in partnership with other non-profits and some really great ladies.  We are a non-profit 501c3 tax exempt organization.​​

HISTORY OF THE GFWC EMBLEM


GFWC’s emblem depicts a circular band signifying eternity. In the center of the circular band, the crusader’s shield emerges from a darkened world (represented by the field of darkness), which represents enlightenment. The enameled colors—red, white, and blue—are the colors of the United States of America. The red implies courage, the white equals purity, and the blue stands for constancy.​​